Creating a big conversation in the countryside 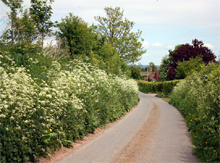 Look, it's possible that I'm just a grumpy old man. (My wife and kids would no doubt provide damning character witnesses). But when I go out into the countryside I often come back feeling just a little bit cross.

I grumble about flailed hedgerows, and I sound off about dumped machinery and broken stiles. I get frustrated when access is obstructed, and when I'm told to keep my dog on a lead instead of under control. I get upset about chemicals sprayed on the soil, wildflower verges mowed at their peak, and water courses lost to the plough.

I could go on - no really, don't get me started... but, when I talk to other people, I find that many of my concerns are shared.

In my last blog I noted the immense good that farmers do in shaping our landscape, even while acknowledging the harm that has been done to our natural capital by decades of bad land use policy and poorly directed farm payments. I also noted that most people, much as they support the idea of British agriculture, think that farm subsidies are spent on flashy trucks and quad bikes.

I wrote about the structural deficit between farm gate and retail prices; between natural assets plundered and those we need to survive. But there is another deficit, and this one is social.

There is a gulf of understanding and expectation between the average person and the average farmer. Between those who eat healthy meals and the farmers who supply volume products for discount retailers. Between the joyful lives of the fluffy animals we see on CBeebies and Countryfile, and the millions forced into cages on intensive farms. Between those who use the countryside for pleasure, and those who work the land day-in-day-out.

And this deficit works both ways.

When we leave the European Union the government should guarantee ongoing payments for the next generation of farmers. But farmers need to actively engage the taxpaying public in order to make the case for that new deal.

They need demonstrate the good that they do, explain some of the decisions that they make, and start to show an understanding of the needs and concerns of the great British public that supports them.

In other words, we need a big conversation in the countryside between farmers and other countryside users. Farmers need to make the case for ongoing taxpayer support, and start working to find compromises to ensure that Britain's countryside works for everyone.

Creating a big conversation
A decade or so back I was general secretary of the National Farmers' Union on the Isle of Man. At that time Manx farming had some major challenges.  Imports threatened home production, and the cost of export across the Irish Sea was high.

Unfortunately, public support was also at an all time low, and we needed urgently to turn the tide of public opinion. So, together with Isle of Man Government, we initiated a campaign to transform attitudes to Manx food and farming.

Throughout this campaign we actively managed conversations between farmers and other countryside users, and within eighteen months food and farming had once again become a jewel in the Isle of Man's crown.

Under the surface, we found that there was still an enormous amount of goodwill towards Manx agriculture, but for too long it had been taken for granted. High immigration levels from England and Ireland also meant that fewer people had a direct family link to the island. With this in mind, we got out there, made the case for Manx food and farming, and found that people enthusiastically flocked back in support of home production. We championed Manx meat and dairy, bread and flour, veges, herbs, honey and mushrooms. If you wanted to, you could fill your basket with island-produced food.

In the first year of the campaign there were around 200 separate events either hosted or inspired by us in support of Manx farming. We hosted cream teas on farms for ramblers, and visited environmental groups to give talks. Farmers hosted heritage, nature, and bird watching tours on their farms. We put on a bonfire night extravaganza you could probably have seen from space. And we organised a Christmas carol service in a cow shed, with a silver band and mince pies, led by the Bishop, with readings by farmers and a government minister, which was attended by more than 300 people.

We also saturated the Isle of Man's media (of which there is a surprising amount) with positive food and farming stories. Before the campaign began nearly every press mention of Manx farming was negative, but right from the start of our project that changed completely. In addition, I wrote columns in newspapers and magazines, commentated regularly on the radio, and produced two series of the Manx Food Show for the island's public service radio station.

In this way we built understanding. We restored trust and mutual respect. We brought sometimes opposing interests together in a room (or a barn) and humanised concerns and abstract conflicts. And we created a larger, more positive market for Manx farmers, because more people knew at least a little of the challenges and hardships associated with food production in the beautiful but rugged, wind-blown landscape of the Isle of Man.

This campaign was run a decade ago on a big rock in the Irish Sea.  But we could do much worse than to replicate it here and now before the UK leaves the European Union.

Although the UK is much bigger, it is still made up of distinct areas and regions, each with a distinct character, each with a lots of people passionate about where they live, and each with a local media keen to support local events.

In Britain, the nearest relation is Open Farm Sunday. This is a great start, but it doesn't do nearly enough. Most of the OFS events that I've been to have been full of people who already support British farming. We need events that actively manage conversations between farmers and conservationists; environmentalists; heritage enthusiasts; welfare groups; or footpath users.  Events that record opinions and face up to challenges, that engender understanding and foster compromise.

We need a big conversation in the countryside, and we could do much worse than follow the Isle of Man's example.